In the second half of March 2011, 15 metrologists from Caribbean National Bureaus of Standards (NBS) received two weeks hands-on training at different EURAMET member NMIs in fields like mass metrology, pressure, volume, temperature and electricity meters. The training was framed by initial and final workshops including a training course on measurement uncertainty at the PTB / EURAMET headquarters in Braunschweig, Germany, on 14 and 28/29 March 2011 respectively.

The activity was financed by the EU ACP Programme PRO€INVEST (www.proinvest-eu.org), and coordinated by the Technical Cooperation of the German NMI Physikalisch-Technische Bundesanstalt (PTB) together with EURAMET and CROSQ, the CARICOM Regional Organisation for Standards and Quality.

The objective of the training activity was to develop the capacity of the CARIFORUM NMIs to provide necessary metrological services, as well as to strengthen the partnership and professional ties between EURAMET and CROSQ. The programme supported the implementation of the WTO Agreement on Technical Barriers to Trade (TBT) as well as the Economic Partnership Agreements between the CARIFORUM and the EU. It is a concrete example of successful collaboration and cooperation between technical organisations on TBT issues of Europe and Cariforum, which are promoted by the EPA (Title I, Chapter 6). 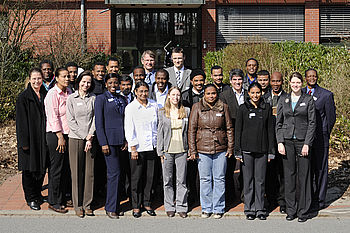 CROSQ and EURAMET would like to thank the participating institutions for their engagement:

As well as the